The internet, as you all know, has a plethora of information, videos, images that are available on numerous websites. Thousands of websites are registered, web pages written and published, every minute of every day. All of this being public are waiting to be read, watched, or consumed by millions of users. Even still, the internet has layers. Beneath the surface level of public, view-able websites, there is an anonymous level. Here, anyone can post anything they want if they have access to it. It is notoriously called the Darknet.

What comes to your mind when you hear the word darknet? Something spooky, something mysterious or maybe something you cannot see. Well, if you have such thoughts in your mind you are somewhat correct. As the name suggests, Darknet is an area of the internet which is beyond the reach of mainstream search engines.  The Internet contains many such websites (more than you can think of) that is beyond the reach of common search engines such as Google, Yahoo or Bing and general browsing. This is called the Darknet.

Theoretically, darknet is a slice of routed, allocated IP space not hosted on any of the popular or known services. Data or traffic arriving at and from such IP addresses are undesired since it has no known active hosts and is not discoverable by any usual means.

The jargon denotes both a single private network (darknet) and the combined portion of Internet space (Darknets), designed in that manner.

How it all started?

As the adage goes “No one is born a criminal”, the term Darknet was initially devised in the late 1900s to connect to a host of computer networks that were deserted from the ARPANET. This was mainly for security reasons and intelligence operations. These darknets were permitted to receive data and allow traffic from other networks but were inaccessible and invisible in the network lists to the others.

Even though the right reasons led to the creation of Darknet, (such as secretive intelligence operations and for security purposes), it is now under the clutches of felons and cyber-criminals.

What led this on?

Users of the darknet are truly anonymous, i.e. Maintaining their anonymity is a must, regardless of what content they are trying to see/send/receive. It is this unrecognition or privacy that enticed the unlawful component to it. Here they feel free to conduct their illicit business and express themselves without any fright of repercussion. It has, therefore, become a haven for criminals selling drugs and guns, human trafficking and scamming, piracy, hacking etc.

Almost all the sites on the Dark Web hide their identity using the Tor Encryption Tool. It is one of the most popular software available on the internet to access the Darknet. It is an open source project to maintain the anonymity of users on the internet, where non-standard protocols and ports foster the information sharing. Other popular darknets include Freenet and I2P.

Such networks are typically decentralized, traffic is routed through a wide-spread system of servers all over the world, which are often hosted and maintained by volunteers. The complex routing network makes it difficult to trace and identify communications as well as the communicators.

The dark web, to function flawlessly and at the same time to protect the anonymity of the users on its network, uses a simple yet layered mechanism called the Onion Relays. Tor suitably adopted an onion as their marker, because the layers of an onion are the perfect illustration of their encryption/decryption mechanism.

This not only hides the communication messages but also the fact that exchange of information is taking place.

To sum up, transmitted data through these dark networks undergoes encryption several times in nested layers. After receiving, multiple onion relays in the Tor network finally shell out the data to the desired website.

Despite all the safeguards, a darknet can never be completely invisible. In October 2011, the hacktivist group Anonymous breached the Tor darknet to take down the website hosting service named Freedom Hosting. It was home to over forty child pornography sites.

Below are some terms that are synonymous to the term Darknet.  However, in reality, they are different aspects of a larger concept.

Let us have a look at the differences between these commonly misrepresented terms.

Now we already have a dab of an idea about the Darknet. It basically is those spaces (websites) of the Internet that are dark (unreachable). Don’t you think all these websites must have a connection among themselves so as to form their own dark network?

Exactly! This Dark Web refers to these websites that exist on a secret and encrypted network and are inaccessible by traditional search engines. You cannot visit these websites through any customary browsers as well.

The Deep web is that part of the Internet which Google or Yahoo does not index.

Darknet is a private network with anonymity and a refusal for publicly sharing IP addresses. The collection of all such hosts forms the Dark Web, which is basically a subsection of the Deep web. In order to access a page on the deep web, one must click on a direct link already provided or already know the URL of the desired page. 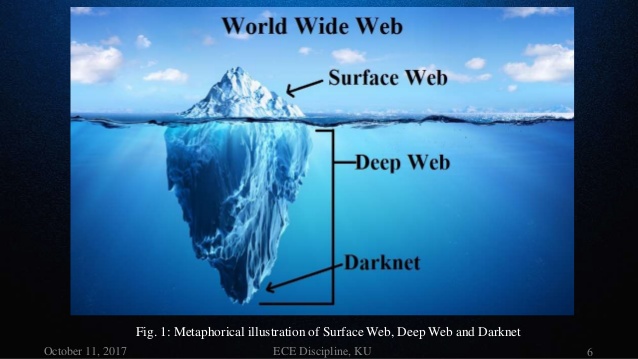 The Dark Internet(Lost Net  or  Greynet) is a collection of those network hosts on the Internet that is unquestionably unapproachable by anyone. About 5% of the internet i.e. about a 100 million hosts fall in this category.

Within the Deep Web, exists the Dark Web which is a puddle of Darknets. Search engines do not index these websites. These are only available to computers using the distinctive software. This protects facelessness of the users.

The stars and shocks of unrestricted and unfettered expression without the confines or courtesy of the law fills the darknet. It is worth stating that not everything on the Darknet is so evil or disturbing. Since it is difficult to track users on these networks, it has transformed into a haven for free tongue and expression. It specifically happens in nations where the internet is severely controlled and blocked.

These also include harmless places such as educational databases and commercial websites, as well as those with dappled subjects such as black markets, fetish communities, and hacking and piracy.

A pawn stuck between the innocent and the corrupt is what is the Darknet.